All three parties unified in asking Speaker for a cat

For a brief, harmonious moment, the three political caucuses of the B.C. Legislature agreed on something.

Chilliwack-Kent MLA Kelli Paddon represented the B.C. NDP in the three-party inquiry to B.C. Legislative Speaker Raj Chouhan to get a Legislature cat after the reveal of the newest addition to Alberta’s Legislature, a kitten named Hansard.

Alberta Legislative Speaker Nathan Cooper showcased the tiny but mighty tuxedo kitten via a Twitter post on Aug. 4, seated on the speaker’s chair and meowing what was undoubtedly an eloquent practice speech. The post caught the attention of B.C. legislators soon after.

Paddon stated the B.C. NDP was sure that the cat would be “a litter-ally purrfect addition to the Legislature.”

“While some politicians might respond with cheesy cat puns, the B.C. NDP is not kitten around,” she stated. “It would help us all keep a pawsitive catitude.” Paddon said among the names suggested were Minister Mistoffelees, Cat Conroy and Meowrders of the Day.

Chouhan has not yet commented on the possibility of a legislature cat – but hope springs eternal. 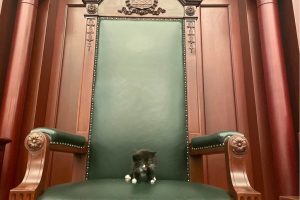 Find links to government services and answers to your questions!

Stay informed on what's happening in your community